A moody season in Patagonia

The patagonian season has not escaped the moodiness of the climate that has affected the world in the last few months. 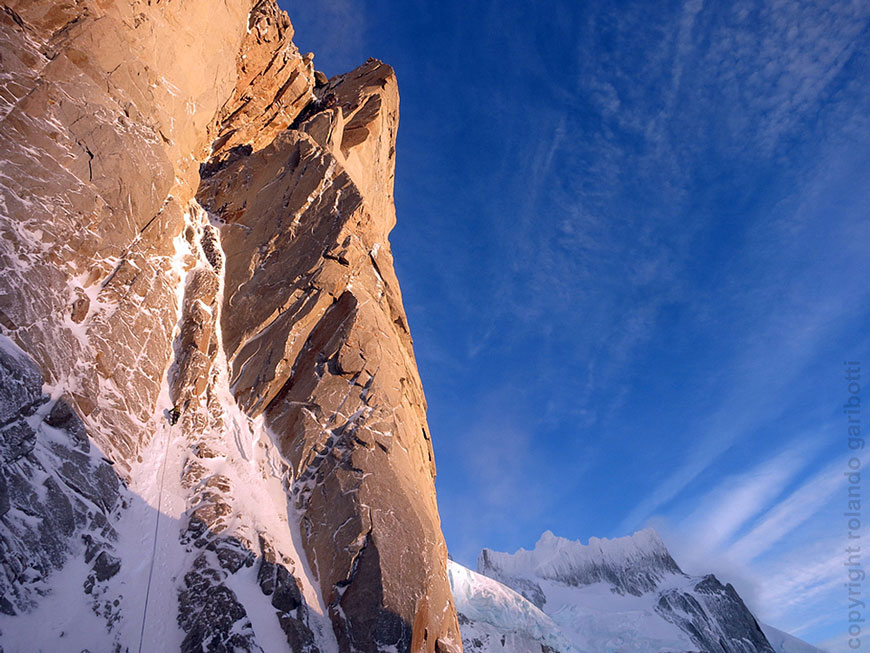 So far the patagonian season has not escaped the moodiness of the climate that has affected the world in the last few months. Winter did not start until mid January in some areas of the Alps; in the Dolomites three meters of snow fell in a little over a week; in North America Niagara Falls froze for the very first time; in Patagonia there was not a single day of good weather between November and end of January.

The "winter conditions" of this patagonian summer drove people to the handful of routes that they know to be good under such conditions, routes like the Supercanaleta on Cerro Fitz Roy, the various ice runnels in the east face of Aguja Guillaumet, the route Exocet on Aguja Standhardt, etc. This resulted in dangerous overcrowding, which played a role in the two most serious accidents of the season.

For those that visited the area in the 1980s and 90s the weather this season was not unusual. Back then it was common to have entire seasons without long good weather spells. However, the bad weather was a surprise to many of the new comers, who seduced by the last few "tropical" seasons expected to find benign conditions. A number of the visiting climbers did not even bring a proper alpine climbing kit this year and they found themselves scrambling to rent and borrow warmer boots, steel crampons and ice-axes.

The short and half decent weather windows kept everyone in modest objectives. Some repeated routes, others searched for short new routes, while others put their sights on some of the peaks that still remain unclimbed. At least seven summits got climbed for the very first time, amongst them Aguja Dumbo, Aguja Volonqui, Cerro Marconi Central, Cerro Piergiorgio, Punta los Tres Mosqueteros and Aguja El Tridente.

In three of these cases decades earlier climbers had reached the "vicinity" of the summit, but had failed to stand on the highest point. This is a common occurrence in this area because the summits are often guarded by devilish rime mushrooms, that are very difficult to climb. The rime has the consistency of cotton candy and often the rock below is blank, so they cannot be protected adequately.

It is surprising that there are so many unclimbed summits in such a well trodden area. This is something quite unusual, something that does not happen in the other well-known mountain ranges of the world. Usually any mountain area goes through several stages: exploration is followed by the first ascent of most of the main summits and only later is followed by difficult routes. Because in this area the exploration and first ascent period was short and carried out by very few people, there remain many blanks in the map. Alpinism only started here in full force in the 1970s and by then people were mostly interest in hard routes rather than climbing unclimbed summits. Also partly to blame is the fact that Cerro Fitz Roy and Cerro Torre, the divas, catch all the attention and in doing so they cast a shadow on everything that surrounds them.

Colin Haley, my partner, and I have not been able to do much climbing in the two months we have been here, but it was a pleasant surprise to be the first to climb to the summits of imposing peaks such as Cerro Piergiorgio and Cerro Marconi Central. It has been refreshing to play the role of old school mountaineers trying to reach summits for the very first time.