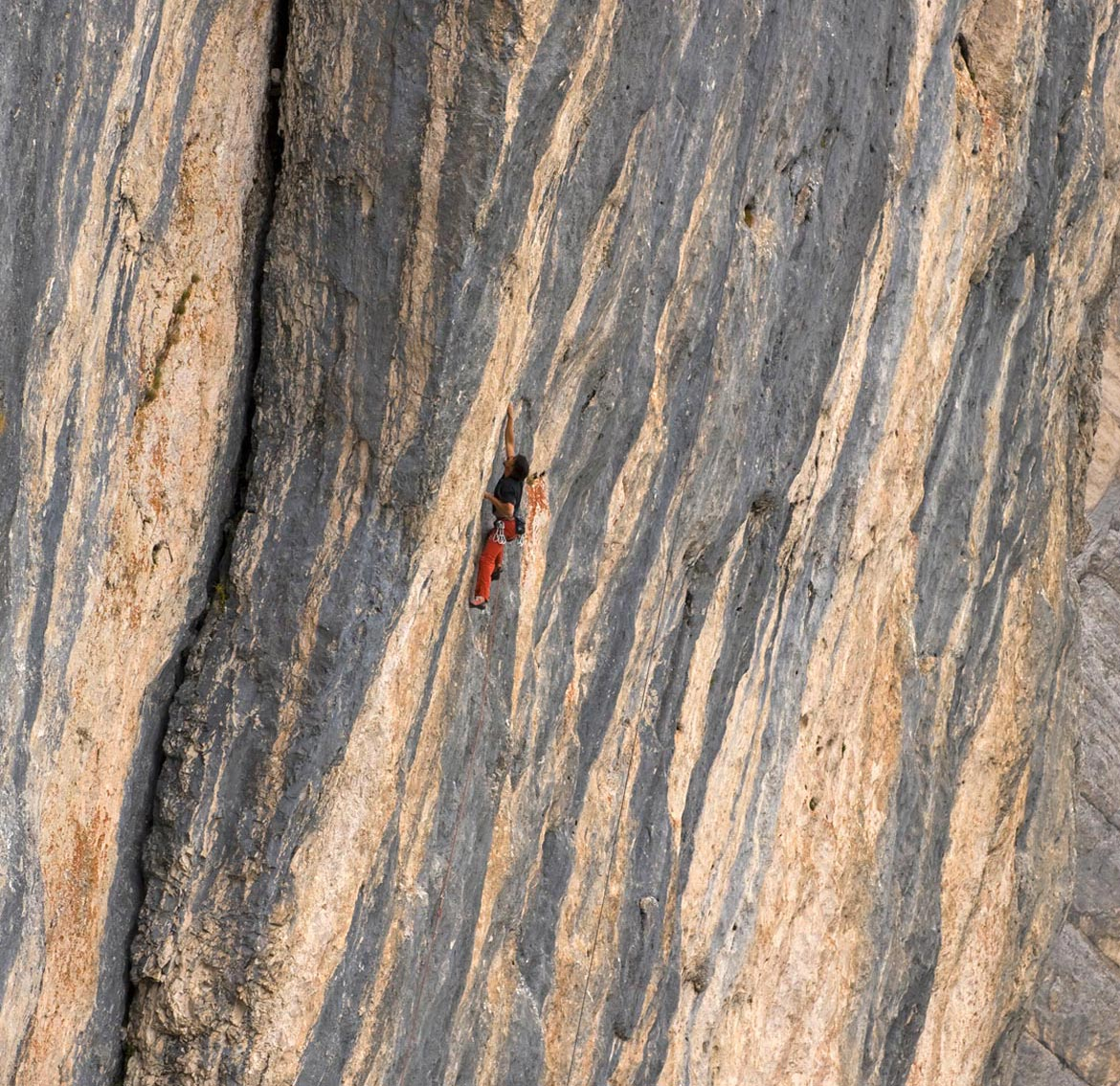 I'd like to talk about the chance events which led to this article. In effect a series of fortuitous events, like the simple request for a photo, can provide you with the opportunity to get to know a historic area better, as well as that of a small personal story. I wasn't much older than 12 when my brother Luca took me up my first mountain route, namely "Roberta 83" and my clearest memory is of him climbing barefoot, perhaps because he wanted to emulate the best climbers of that period.

Years passed and my climbing ability finally enabled me to to do what I had only ever dreamt of, and which in that area and in those days was considered a sort of "rite of passage": go climbing in Val San Nicolò. Fleeting encounters with the legends of those days, such as Heinz Mariacher, Luisa Iovane and Bruno Pederiva, who not by chance haven't disappeared without a trace but continue even today, were a sort of apparition for young, inexperienced climbers like us. They almost aroused some form of reverential fear. When I think about it now it makes me smile, but at that time the emotion of watching them climb was comparable to what I imagine a young footballer feels when he sees his favourite player close up.

Val San Nicolò evolved throughout the years but it has always remained a historic crag, thanks to the its beauty, the fantastic routes and and because when you climb there you can almost feel, sense that it is here that the history of sport climbing evolved, thanks to the numerous climbers who dedicated their lives to this. Over the years above all Heinz and Bruno bolted numerous pitches, many of which have already been freed, while others are still awaiting their first repeat. Amongst those who climb here the rule still applies that those who equip a route have a sort of right to free it, unless of course he decides to "offer" it to anyone else. Which means allow him to try and, eventually, free it. And it's here where the experience began which I'd like to tell you.

For me Val San Nicolò is still a safety-net in summer when, because of work commitments, I can't travel further afield. Last summer I was drawn in by a magnificent slab which mirrors the "Sasso delle Undici" and which is followed by a gigantic roof. Despite knowing that a route equipped by Heinz existed up there, I'd never spoken to him about it, perhaps out of some form of respect since I didn't know what he intended to do with it. One day though, while descending from a climb, he spoke to me about it and his few, efficient and pondered words made me understand that the time had come for someone to go try it. I was immediately enthused.

A few days later, together with my usual partner Stenico, I found myself engaged on something particular, once again far removed from normal standards. I don't want to talk too much about the technical aspects of the route, all I want to say is that the pitch starts from a ledge, is graded 8b/c and is 45m long. The first section is typical Val San Nicolò style, long moves up pockets which scatter this limestone, and this is followed by a large roof with athletic, airy and spectacular moves. It's almost a game, dancing more than 100m above the ground and it made me feel the same emotions I felt more than twenty years ago..."

For me it is these sensations, which repeat themselves and which manage to unite past and future generations, which are the strength and essence of climbing. These emotions are timeless and continue, now and for always, to feed from the same love.