Alessandro Baù tells us about Colonne d’Ercole with Alessandro Beber and Nicola Tondini and how everything started. 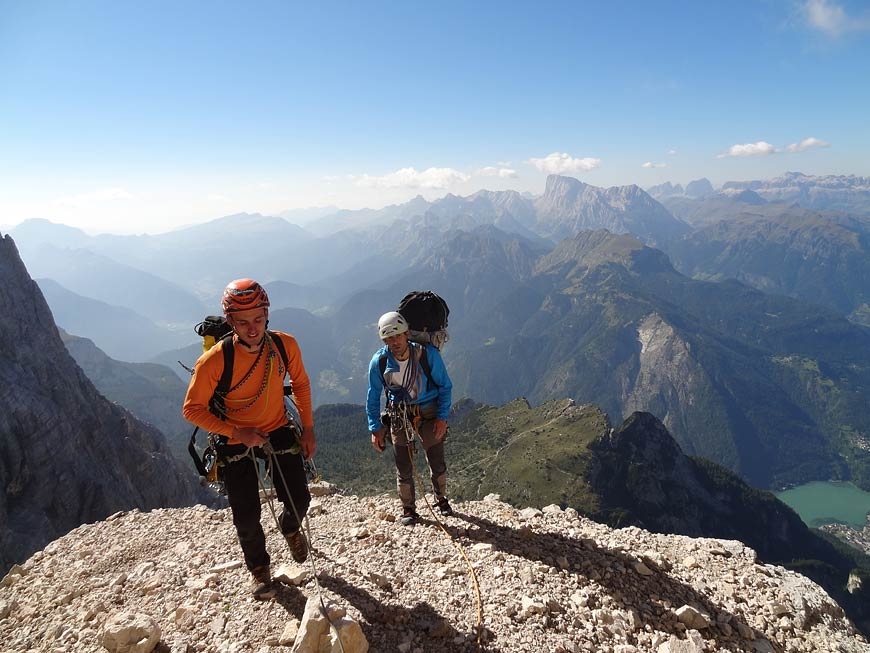 The name of Colonne d’Ercole, the route up Punta Tissi North-West Civetta, was chosen by Ale  but the team immediately agreed on it since it perfectly describes the morphology of the wall and conveys the unforgettable feeling of the experience done: Punta Tissi ends with a majestic yellow pillar called “the pedestal” and the ascent is so hard to put a strain on our bodies and minds.

They say the route is “beautiful, hard and ethical”. It is beautiful because it’s an incredible rock, of 28 pitches only three or four are brittle while all the rest makes it the best rock of the Marmolada”. The line is regular and independent: in the first third of the wall, the ascent directions are given by a series of cracks and a huge hanging dihedral rock. The central part is characterized by stellar grey slabs  while the last section is a sequence of pedestals and slabs with a more carved rock. It is difficult because the sequence of the routes and the subjective commitment implies a demanding test. The biggest difficulty is not forbidding (IX grades). The sequence of the pitches in the central section should be IX-,IX-,VIII/VIII+,IX,IX-,VIII+/IX- while on the remaining pitches there are still several  VIII and VII that makes you tired.” It’s ethical because although they had a drill, they only used simple belays, pegs and a hammer.

The idea was conceived in 2008 when Alec and Nic met and decided to plan a route together. After monitoring Tissi, they had no doubts about the route to be opened and Ale (Beber) immediately accepted their call to join the team. The team was perfect: at the beginning they agreed on doing a pitch each so as to feel always rested. On the central slabs, Ale and Nic followed in turn a little more but Ale (Beber) took them far from the slabs throughout an incredible way with the help of mono and bidoigt. They didn’t use any spits except some regular pegs and simple belays: “Frankly speaking” Ale says “the second time we ascended (when we opened 5 pitches, from 9 to 13, VII-, VII+, II, IX-, IX-), we had some spits and a drill in our backpack because from the bottom, the slabs of the central section seemed really off-limits. When we reached the first ledge and we saw what we were going through, we understood that it would be hard….but we could at least try! On that occasion spits remained in our backpack. Since then on, even for the most demanding pitches, we have only had a hammer, pegs and a great desire of climbing!”
This adventure lasted 3 years because it was hard to have all the three of them free at the same time but their motivation was always high. “Moreover, during these years we have also become good friends!” Ale says.

The two-day free climbing was great: “ It was early September and the sky was really clear and it doesn’t happen so frequently”. “What I don’t’ like”, he adds, “is that it’s over”. It will be hard for them to find other lines of the same importance. Obviously, we will try!  After Chimera Verticale, achieving Colonne D’Ercole should have been great.When Ale looks at North West from Laste, he thinks about all the great adventures done and he feels like it is a dream!

“It’s an amazing ascent and it should be seen at least from far! It can be planned in two or three days:  if you choose the first solution you can bivouac not very comfortably after the 15th pitch. On the other hand, if you want to take it easy, there are two huge ledges on the 10th and 22nd (or 23rd) pitch.” And “northwest Civetta is well worth an ascent when you are on the folds of the rock and you feel the magnificence of the surroundings. Several groups of climbers’ first experience is Aste, a great and important route  but few are those who know that “the Polish route” is a good alternative just as beautiful but less known”

What it comes out from this story is that Punta Tissi, North West Civetta is an incredible route that takes your breath away, one of the reference route in the Dolomites. In the last 22 years, up Civetta, only 5 routes have been opened on the wall including Chimera Verticale. There is nothing left for us but to watch the video and wish our climbersthat Colonne d’Ercole may soon become one of the reference route of Alpinism in the Dolomites.