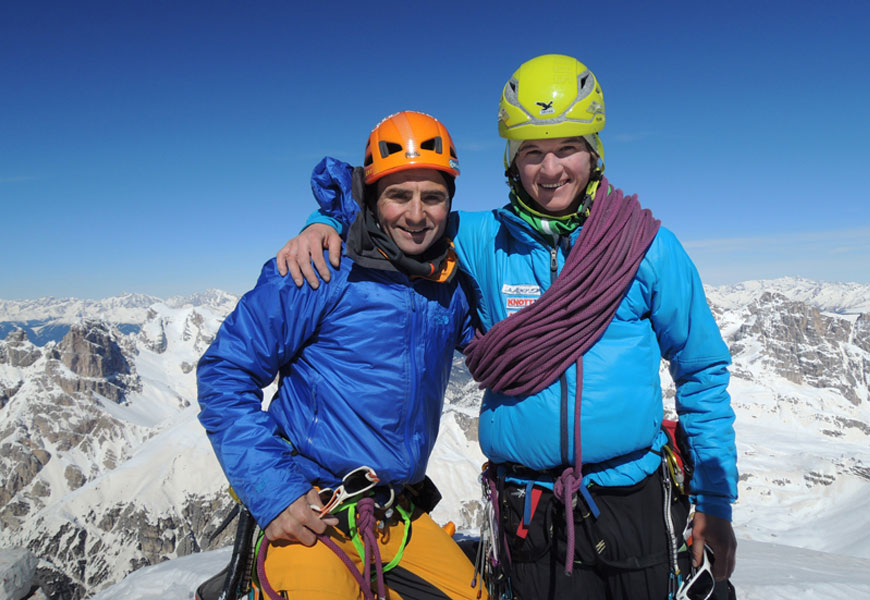 Together with Ueli Steck I did the first Winter Trilogy of the three north faces  of the Tre Cime, last monday and tuesday 17th/18th march.  We climbed the routes "Cassin" at the Cima Ovest, "Comici" at the Cima Grande and  "Innerkofler", starting with the north face at the Cima Piccola, non-stop. The  classic lines of the north faces always to the summit and descending the normal  route.

I thought about this project since a long time, but it never became reality. Last tu esday  I wrote Ueli an SMS if he is motivated to try the Trilogy. After I checked out  the snow conditions two days later, we decided to give it a try. With this plan  we met in Misurina for a pizza and made the last plans for the try. Afterwards  we drove with skidoos up to the Auronzo winter hut.  The next morning we started into the "Cassin" (8 or 6+/A0, 650m). Actually we  planned to climb it within 6-12h depending on the conditions, but with running  belays, simultaneus and fast climbing we reached the top already after 3h37min.  We were quite surprised but definitely very happy! For the descent we needed  about one hour. Our friend Lukas Binder was already waiting in the col between  Cima Ovest and Cima Grande and cooked water for us. After a small break we descended to the start of the "Comici" (7 or 6/A0 500m). We climbed the small buttress and the first  pitch without rope and then we went for it again. With climbing  always very long stretched pitches and simulclimbing in the upper, easier part  we were very fast until the so called "Ringband", from which we traversed in a  lot of snow to the south face, that needed a bit of time, but reaching the summit in the last daylight was still faster then we expected (4h47min) and a very unique athomosphere up there.  Although I knew the descent from severel summer  ascents quite well, with all the snow and the darkness, it looked very  different. But we managed to reach the start of the north face of the Cima Piccola  at about 21.00 o'clock. Again we were welcomed by our friend Flo Rex, who served us some warm tea.  We ate some bars, drank a lot and started into the last route. I think,  we were in a kind of tunnel and the end of it was not so far anymore, but still  to climb a route like this in the night, with crampons and gloves was a little  bit a mental thing. Until the saddle of the north face we followed a route which  name is not official, classical alpine mixed terrrain, with a small boulder over  a big cornice. Up to the saddle we climbed the "Innerkofler" (IV+) to the summit  of the small Cime. We topped out at about 00:20 o'clock and were really really  happy and also a bit exhausted - for sure.

Actually we counted with 3 0 hours or even more but like this we needed ca. 16h  (15h42min) from the start of the Cima West to the top of the small cime -  we were really surprised because well known partys normally needed in history  between 10-20h for one route. But we have to say, that we really pushed forward, we  went extremely light, no rap line, no stove, no hardshell, nothing. And we  climbed really fast, for example 7 stretcher pitches in the Cassin...and we had  the best support of our buddies Flo Rex and Lukas Binder, without them it would  have been much harder!  Sometimes there are these days were everything is perfect - the conditions are  good, the team is good and the head plays well.  At 02:00 o'clock we reached the Auronzo hut again, woke up Flo, who was already  sleeping, opened a 2006er bottle of Wine and heard with Ueli's iPhone the song  "Days like this" from the Toten Hosen.