12 months backtracking a winter that lasted a whole year 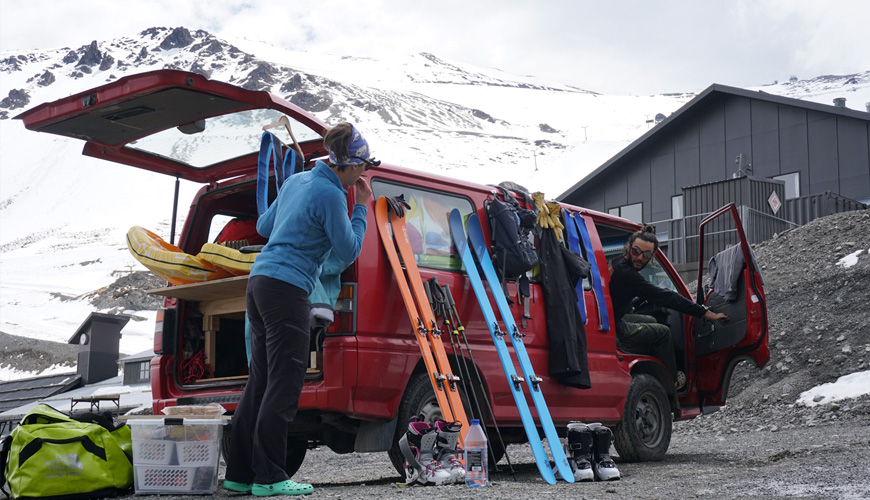 Who wouldn’t want to travel around the world 12 months a year?

Matteo Calcamuggi and Paola Marquis pursued a winter that lasted an entire year. Pure joy, immersed in nature, in the search of the perfect line.

A journey dedicated to discovering the deepest sense of places that were more than just seen – they were experienced: skiing, climbing, exploring and meeting up with others who share mutual passions.

Not many people know that in the United States you can ski in the woods at an altitude of over 3000 metres above sea level.
That explains the extremely powdery and deep snow. There are times that you can’t even feel it and often enough you have to practically swim through this sea of white.
We wandered around the United States for about two months during one of the coldest winters registered in 30 years.
No matter where we went, we found the same weather conditions: it was always cold with plenty of snow and deep powder.

I think that Canada and the Rocky Mountains have been part of our collective imaginary forever and ever.
We would travel northward for eight hours straight in our little camper, driving though woods that seemed to have no end and every time we saw a mountain whose name we didn’t know our minds would start to plan out a possible line of descent.

Alaska is truly the final frontier. A place where the mountains and glaciers extend for as far as the eye can see. Europeans like ourselves are used to the “Old World” mountains so the distances one crosses up here are mind-boggling to us. This area is extreme! And it’s a paradise for adventure skiing - as long as you’ve got the patience of a Buddhist monk and can wait up to two weeks for the Big Day.

You can go skiing on a volcano here in Europe, too. All you have to do is take a plane or grab a ferryboat to Sicily and climb Etna. It’s different in South America. The open spaces are immense and there is one volcano after another along the fault line – especially in Chile. There are volcanoes so perfectly cone-shaped that you can climb them in a single long diagonal spiral.

The Peruvian mountains aren’t exactly a skier’s dream destination. They don’t make the top ten list of places to ski on before you get too old. You can hardly ever find snow in Peru as nice as the snow you find in the Alps in the spring and the conditions of the walls of these mountains near the equator are usually only good a few days out of the year. This was my second time in the Cordillera Blanca and the first time for Paola. Yet, in spite of everything, the excitement of wearing your skis at 6000 metres above sea level is always a thrill. It’s a feeling that takes your mind off those enormous rucksacks you’ve been carrying around for days on your way up. You forget about them at least for the time it takes you to finally ski down these giants.

After so many months away from home, when we got to the Frey Shelter it felt almost like being at home for a couple of days. Excellent wine mixed with Sangre Latino and a language similar to our native tongue helped a lot. But, most of all there was a myriad of trails to ski waiting out there for us – set within red granite peaks that remind us so much of Chamonix and Mont Blanc