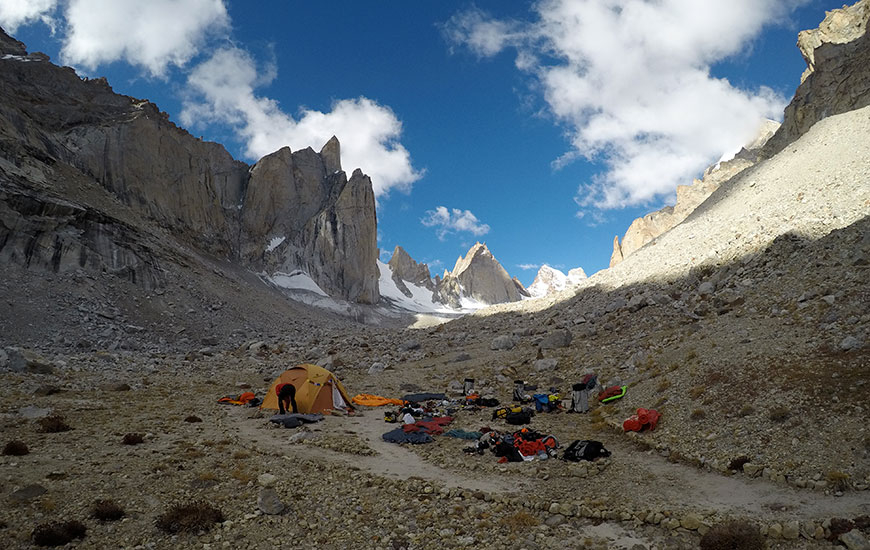 We wish them a good luck this summer, when they left Italy. The five, strong mountaineers,  after having dreamed the great inviolate mountain, explored the wall with their own eyes and hypothesized a line of ascent, have moved on to action.

They acclimatized, they waited for the window of good weather, and then they left in the direction of the summit. They bivouacked one night on the wall, then reached the north summit. From there only 200 meters of rocky and sharp ridge would be missed to reach the main summit. At sunset time, however, the light goes faster than you would like, and so Luca and his teammates were forced to go down in the dark and with a bad weather forecast for the following day. Luca has returned to Italy, and now looks back to understand what brought him this new experience.

The ascent (and descent):

After many expeditions where he participated, for the first time he was in charge to choose the target and organize all the logistics. "A great challenge, which made me more mature from a mountaineering point of view."

As a matter of gravity, climbers are used to work harder climbing rather than descending, but this time it was different: "The ascent of the new route went well, all smiling, high morale and jokes. It was sunny and it was fine. "

But then, in an attempt to reach the real peak, they accelerated, squeezing out the remaining energy from their bodies. But it was definetely too late, so the choice to go back, the concentration for a challenging descent. "We were tired, we had to invent 15 abseiling in the dark and be sure to avoid the overhangings of the north-west face."

I wonder if has been more dangerous the descent from the Chareze Ri or the stay at the base camp... "A family of Himalayan bears visited us, we were awakened by suspected night noises, but luckily the bears were discreet , left only a few traces on the ground! "The new route has been call " Jullay Temù ", or" hello bear "in Ladakhi, just for this reason. After one last week that they spent in the rain, the group returned to Padum, the nearest village. "Here I and Mose (Enrico Mosetti nd.) We risked to kill ourselves." Luca laughs thinking about the absurd destiny that it could be hit him, right at the end of an expedition lived with tranquility, and shared with good friends. "We hired a motorbike and we made a good trip for about fifty kilometers, updating the valley, and on the way back there was a rubber tire in the sand and we flew to the ground, my duvet jacket exploded, and we were able to get back togetherthe  pieces of the bike in the middle of nowhere ... "

Thanks Luca for sharing with us some beautiful fragments of your trip. Do you plan to come back to get to the main summit?

"I don’t think so, the world is big... and even staying in Zanskar you can choose an embarrassing amount of beautiful virgin mountains waiting for other adventures!"