Matteo Eydallin wins also the 2015 edition of the race 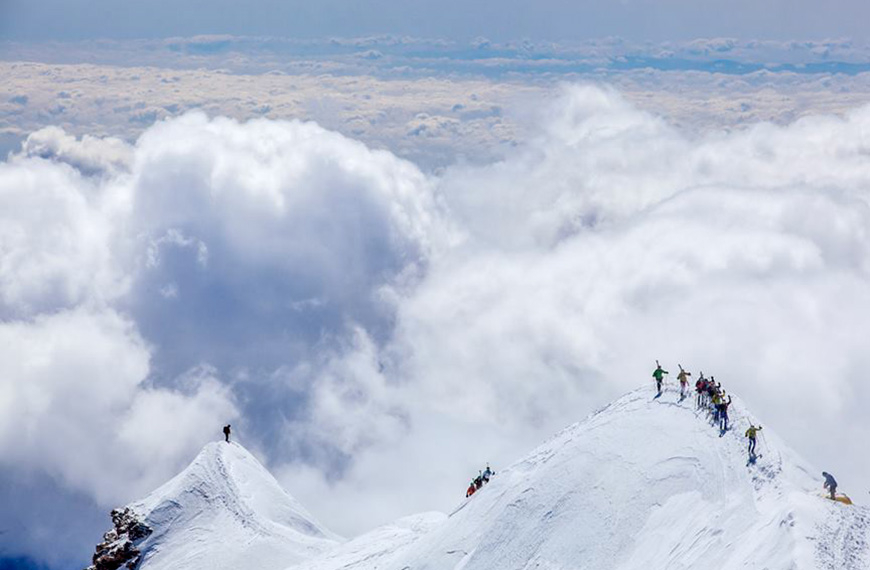 The cherry on the top of a perfect season. Matteo Eydallin, from Team Esercito Italiano wins also the 2015’s edition of the Trofeo Mezzalama, with Damiano Lenzi and Michele Boscacci.

This is the third victory in a row for Matteo, that shows again to be one of the strongest athlete in the World of ski mountaineer and to be able to win both in Team and alone.

The legendary ski mountaineering marathon (45 kilometres long with 3500 metres of elevation gain) – this year with had a new inverted route to commemorate the 150th anniversary of the conquest of the Matterhorn - extremely tough going. A closely-fought race between the four leading rope teams who, tracing and retracing their way through the windswept snow, contended for podium places right up until the top of the Castore, the highest point of the course at 4226mt. Then came the final triumphal 12 km descent from the Breithorn col (3826 mt) down to the finishing line at Breuil-Cervinia (2020 m.) in brilliant sunshine at the foot of the imposing mass of the Matterhorn, as thickly covered in snow as a Himalayan mountain face. Victory was seized with great determination by the race favourites, a rope team from Courmayeur’s Centro Sportivo Esercito (Army Sports Centre) made up of Matteo Eydallin with the young Michele Boscacci from Valtellina and Damiano Lenzi from the Valle Ossola. The alpine soldiers completed the race with a time of 5h10’49’’ as a result of the increased elevation gain and strong headwinds. The winners broke away from the other leading teams on the Castore uphill stretch, obtaining a five-minute lead which they kept all the way to the finish. An extremely hard-fought second place was won by the Italia 2 team composed of Robert Antonioli, Manfred Reichegger and Lorenzo Holzknecht who on the long final descent overtook the team composed of Anton Palzer from Germany, with Martin Anthamatten from Switzerland and Pietro Lanfranchi from Bergamo , third with a 17’’ gap.

Amongst the women’s teams, a surprise victory went to newcomers Emelie Forsberg (Sweden), Axelle Mollaret (France) and Jennifer Fiechter (Switzerland) who were close behind the favourites Laetitia Roux (France), Mireia Mirò Varela (Spain) and Severine Pont Combe (Switzerland) during the first part of the race and overtook them at the Lyskamm Nose; they maintained a slender lead right to the line which they crossed with a time 6h35’09’’, with 2’51’’ over their rivals.