Why did you decide to go for the speed record on this particular ascent?
The Biancograt is one of the most beautiful ridges in the Alps, and the Bernina is the only 4,000 metre peak in the central Alps. To speed-climb that mountain you have to be a good runner, because it starts with 10 kilometres on the flat, but also a good climber, because the ridge is very technical and pretty exposed.

You'd already set a speed record on the Biancograt. Why did you want to do it again? Did someone beat your record, or did you want to better your own time?
In 2016 I did it in 3h 58 min, but I wasn't satisfied with that time. I knew it was possible to do it much faster. Due to Covid and the absence of races this year, I thought it was time to have another go.

Do you think you'll try again, and do it even faster?
The conditions weren't perfect (wet snow below 3800 metres and some fresh snow above), but I'm happy with the time I achieved. It was far better than my performance in 2016. I believe records are there to be beaten, so if there's someone faster than me, there it is! But it's important that everyone climbs in the same way.

Some people might think it was the first time you did that climb; others that the Biancograt is part of your training routine. What's the reality? How many times have you climbed that ridge?
I think I've climbed the Biancograt eight times over the years. One time I skied it, and another time I made the descent. So I have to admit I know it quite well. 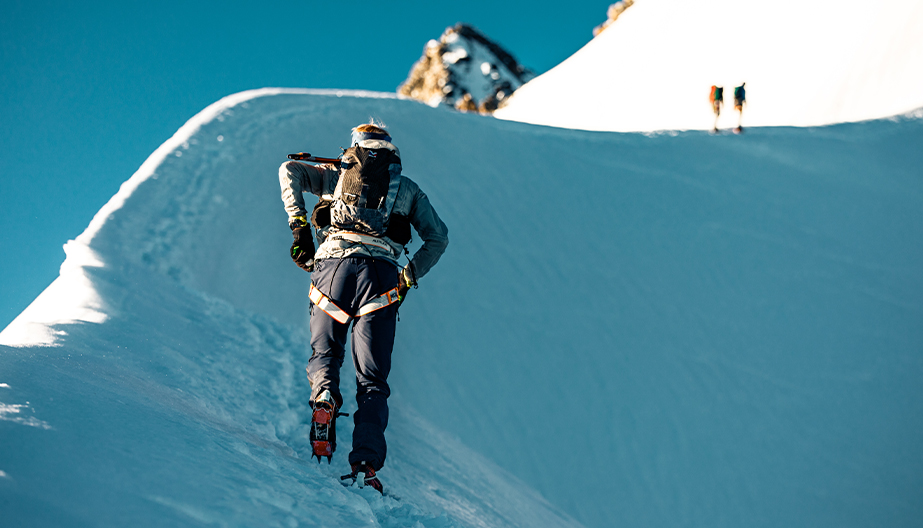 ​​​​​​​
What's the best training for this kind of fast technical climb? How do you manage to ration your energy so you don't get tired but at the same time give 100%?
To do this type of ascent you need a good combination of running training and classic climbing. You have to be fast, but at the same time safe on terrain that's easy but exposed. I didn't do any specific type of training; I climbed the ridge with a photographer a few days before, to acclimatise myself and check out the conditions.

When I set out on this kind of very long, technical ascent, I try to go fast, but a long way off what I consider "full gas"!

Philipp, do you compete in mountain running events too? What are the differences between a competition and a record like this? How do you feel in each of these situations, so similar yet so different?
In a race you just want to be as fast as possible; the technical aspect isn't so important. But the Biancograt record is a completely different story. The conditions are more extreme and you have to be really careful, both on the ridge and on the glacier... You also have to get the timing right: the conditions must be good, but it's better if you don't meet too many climbing groups, because you lose a bit of time overtaking them.

An aspect that's perhaps less discussed on this type of route is the descent. How do you handle that? Do you try and do that fast too?
I went down the normal way, via the Spalla, the Fortezza and Morteratsch (6h 04 min total). When I started the descent I was feeling really good, but when I came to the climb up to Bellavista, that changed completely. It was very warm, and although the trail was there I was sinking into the snow. I tried to go as fast as I could, but I think I lost about half an hour. It would have been very different if the snow had been icy and hard.

Although Philipp is satisfied with his record on the Biancograt, it doesn't mean he's tired of running up and down rocky and ice-covered ridges, those three-dimensional lines that separates earth from sky, so beautiful and so appealing to those looking up from the valley bottom. In fact, not even a month later the scenery has changed, but the rules of the game remain: Our athlete set off from Solda, in the valley, and climbed the Hintergrat ridge to the summit of the Ortler (3905 metres, the highest peak in Trentino-Alto Adige, the would-be 4,000 metres of the eastern Alps) in just 1 h 48 min.

As Philipp told us, climbing a mountain as fast as possible is no joke, and the circumstances are much more serious than in an organised event. Nevertheless, running remains an enjoyable game, a minor personal challenge without podiums or prizes. The mountains are out there, waiting both for the athlete in running shoes and stopwatch and for the walker in sturdy boots looking for the right spot for a camera tripod. Each one of us can find the wonder and the personal significance of these seemingly inanimate rocks, which bring the sky within our reach.