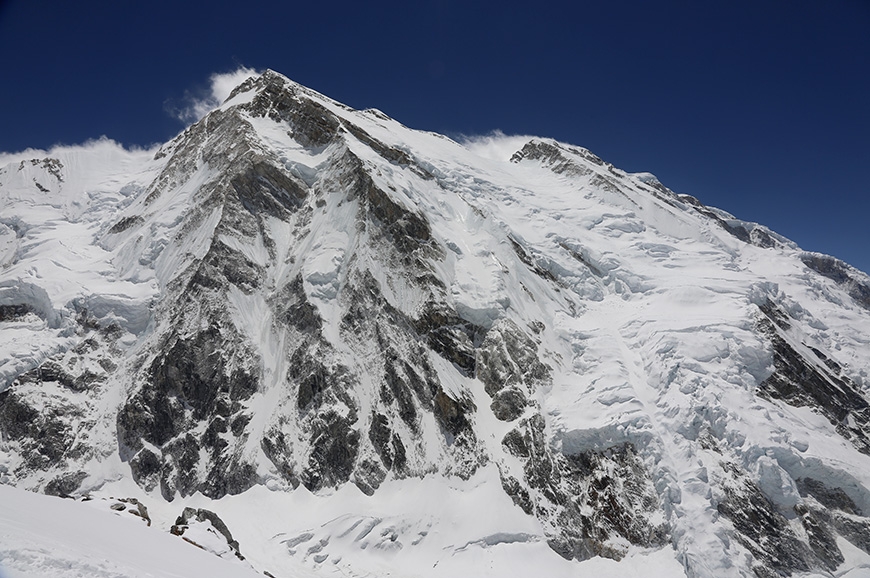 On March 27th we left Milano Malpensa and flew to Khatmandu, through Oman. From there we travelled to Bhiratnagar and then we took a bus that in 12 hours brought us to the start point of the trekking.
In 5 days we reached Ramche (4000 m), where the glacier starts and from there they thought that it would have took 3 days to reach an area where to place the base camp. In the first part of the trekking we followed a valley where Indu people lived and then, walking through some passes, one of them at 3300 m of altitude, we reached a second valley, with some villages of Tibetan culture (Yampudin).
In Ramche, where they used to stop one day, our Sherpa went away apparently with no reason. Without our porters we stayed there nine days. Then our guide hired new sherpas in order to manage to finish the trekking.
In the meantime Mario and I explored the area and we found a place we could use for placing the Camp: it was safe from avalanche, quite flat, near to the Talung and with a small lake born from the water of the glacier, useful to cook the meals for us and our staff (cook and two kitchenboys).
From the base camp (5000 m) the approach to the Talung North Face required to cross a glacier full of crevasses. The path we decided to follow, putting flags useful in the night or in case of fog, passed through an area below serac with the fell of ice blocks. We passed the glacier walk to and fro 15 times.
The uphill that we decided to face was the Via dei Cechi 2013, until a serac at 6000 m of altitude, the only place where to put a tent.
From there the Via dei Cechi bend to the left following not very steep slops with snow/ice. We went on to north-west, with many difficulties due to the ice and a rocky stripe on the highest part. The impossibility to place other camps but only the one at 6000 m of altitude and the difficulties during the 31 pitches, forced us to place ropes along the path. This was done in order to made the downhill quicker and the uphill the following time to go on with the climbing. We hoped the climbing was less difficult in the high part of the rock, but we found unstable blocks and we couldn’t put spikes and friends on the rock.
In the first part of the expedition, weather wasn’t so friendly and we climbed the wall 12, we placed 1300 meters of rope, we climbed 31 pitches always in the same difficulties on ice and mixed terrain. We used a flat surface at 6000 m of altitude in order to save time to go on for the rest of the route.
The time was over and the monsoon arrived and we were forced to go down from two-thirds of the pillar to high 6400m. 300 meter of rope would be sufficient on the rocks, at the end of which there is less slope and the progression is much quicker. Reaching the top and go down through the normal via. We stayed at the base camp during 30 days.
The Talung North Pillar expedition of this year was an experience of growth and a great incentive. To try to open a new route on a Pillar never climbed of a 7000 m mount was a great challenge. In the last few years I tried many climbing on 8000 m mounts without oxygen and I’ll do further. The Talung climbing to high altitude faced many technical difficulties for a new route.