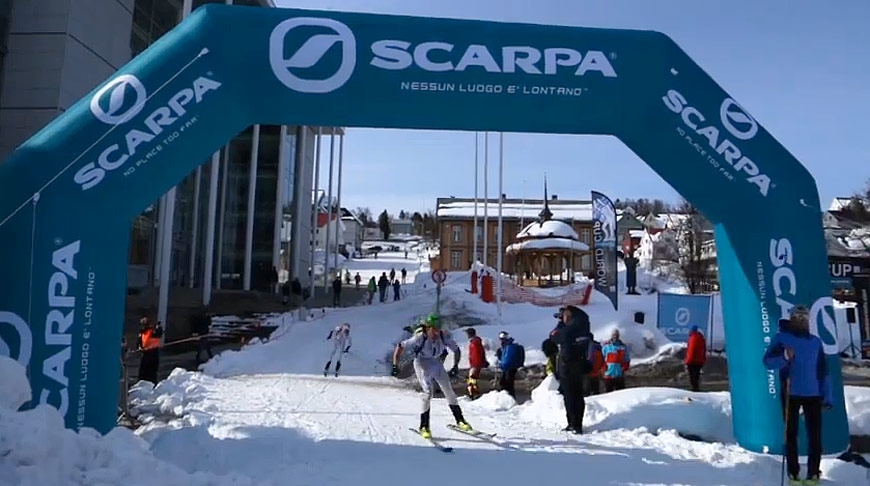 The Norwegian fiords crowned the new ISMF – Scarpa World cup winners. This morning on the Blatind show, a few kilometers from Tromso, the individual race officially closed the World Cup season. The Arctic Race drawn on the slopes giving on to the rocky fiords featured a difference in altitude by 1600 meters, while for the women the difference was 1300 meters. For both, the uphill stretches were three.

The French William Bon Mardion, after being in the back ranks for a while, at the end of the third slope took a few meters’ advantage on the pack formed by Martin Anthamatten, Manfred Reichegger, Yannik Ecouer, Matteo Eydallin, Damiano Lenzi and Alexis Sevennec. It was during the final downhill slope that the French Bon Mardion completed his masterpiece. Extreme lines that he alone was capable of seeing and mostly keeping up to from the beginning to the end.
Thr World Cup winner stopped the clock at 1:10’41’’. Only the Swiss Anthamatten kept up with the leader, though by the finish line he gave a 42-second deficit. In third place, the Italian Matteo Eydallin managed in the last sprint to overtake Yannick Ecoeur and Manfred Reichegger.

As regards the women, Laetitia Roux dominated the race as easily as she did throughout the season. In the first part of the race, Gloriana Pellissier and Maude Mathis kept the French athlete in their sight, though little short of halfway through the race, Roux pushed on the throttle and took the win and the crystal cup.
Laetitia Roux won in 1:09’04, while the Swiss Maude Mathis and the Italian Gloriana Pellissier came second and third, respectively.
As regards the general world cup standings, the top of the podium was taken by Roux with 1239 points. The second place was clinched by Gloriana Pelliser with 950 points, while Maude Mathis came third with 915 points.

As regards the men, the first place was harder fought. Bon Mardion, with 898 points, stepped on the higher spot of the podium. His fellow countryman Matheo Jacquemoud, finished second with 823 points. Third on the podium was the Italian Manfred Reichegger.