The story of the story

A couple of weeks ago Chris Rauch was in Cresciano to try Dave Graham's testpiece The Story of Two Worlds, 8C.

But what happened next is going to be History. Check out how it went, from him words.

About three years ago I tried "The Dagger" for the first time. Back then I thought I could do it pretty quick but practice showed me something different. It took me already 5 sessions to even find a beta that worked for me. Since I started to try it in March and the conditions in Cresciano got warmer and warmer it turned out to be a real physical and mental battle to finish it before the real heat arrives. Luckily two more sessions were enough to complete it.

At that moment Dave Grahams sitstart, "The story of 2 worlds" (8C) seemed to be totally out of reach for me.

The next years I started to try the moves of "The story of 2 worlds" once or twice a year just for fun, but "The Dagger" still felt really hard to me. The lower moves were possible but they felt really hard.

At this seasons New Years Trip to Ticino something was different and I found some crucial betas for "The Dagger". With this new tricks my personal grade of the boulder switched from 8B+ to 8A+ and I was able to do it a few times a day.

Since the lower moves still felt pretty hard I had to recheck my solution and found a really good lockoff heelhook for the move into the little gastonjug from "The Dagger".

I had about 5 sessions this trip, 2 of them were really wet but I always learned something new. I was able to climb from 3 moves in to the top for a few times. On the really last day of the trip, I was able to climb two times from the start to the last hard moves. I still felt quite good there but the end was just soaking wet.

Due to this highpoint I already came back for a little 2 day solomission on the next weekend. Expectations were high, maybe too high. I had to fight hard to even climb "The Dagger", coming from the start it felt impossible. Pretty dissapointed I went to my friends Alfons Dornauer and Florian Schamlzl, who were in Ticino for a week and I could sleep in their appartment. After a really funny evening with some good food and a few motivating words by my friends I went back on the next day with no expectations. At the warm up I realized that evreything felt much better than the day before. Just before the biggest heat of the day I reached my highpoint by falling on the last hard move. After doing the dagger for so many times I didn't think to mess it up on this move.

Back at home I was quite dissapointed and took 2 weeks of abstinence from the boulder. I took everything a bit less serious and didn't train too much. When I drove back with my friend Flo I felt really tired and weak but after warming up on the upper moves I felt pretty confident to make some good efforts. This day it was quite warm and the sun shone directly on the righthand slopers, so we fixed some pads on a little tree nearby to make a little shade and cooler conditions. When I reached the daggerstart for the first time on this day I got really nervous but somehow I managed to get back in my mental bubble and keep going on the meanwhile normal routine on "The Dagger". Anyway, the end turned out to be a real fight. Arriving in the slab I got nervous again because it was soaking wet and a bit dirty in the morning. I tried to calm down a little bit and after reaching the top I couldn`t realize what happened. Nevertheless it still felt a little bit as if there was something missing. 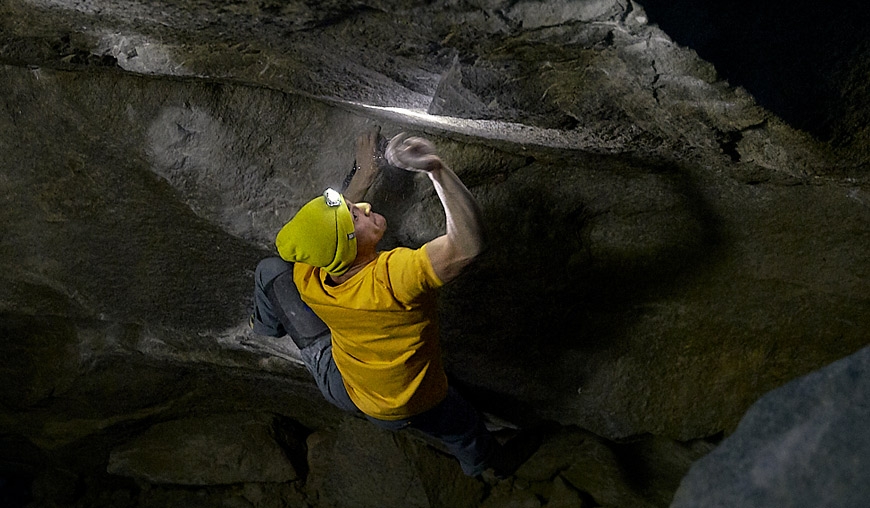 After a big rest I decided to check out the moves of Dai Koyamadas low start. At the beginning it felt really strange and hard for the core but after some effort and trying different betas I found a way that worked for me. I made a few good tries but somehow I always missed the little gastonjug from "The Dagger". As the darkness arrived we started to put our lights on. I just wanted to make a few more tries. As I sat down at the start I had this feeling of being already really happy and satisfied about my day. I started to climb and went through the first part with a really good flow and reached the start of "The Dagger" for the first time. I still felt really good and climbed through the first crux pretty solid. The last crux turned out to be a hell of a fight but somehow I managed to keep going. Standing in the nohand rest on the slab in the total darkness was an unreal experience, my friend Flo gave me his headlamp and I continued to the top. I couldn`t believe it. I nabbed the second ascent of Dai Koyamadas "The story of 2 worlds low start", supposed to be 8C+ but with all the new betas I think it`s more about normal 8C. Props to Dai for the first ascent, the way he did it is much harder and I`m pretty sure it deserves the 8C+ this way!

It`s always something special to climb such an iconic piece of rock. Back in the days I couldn't even imagine to climb this problem one day.

I always had a lot of fun trying these moves together with a lot of old and new friends, even if sometimes the topout was soaked. Nevertheless, I am overhappy to have finished it.

Thanks to everyone who supported me on this journey.