In Wrocław at the World Games, Gold medal for Staša Gejo, third place for Sean McCol and Fanny Gibert 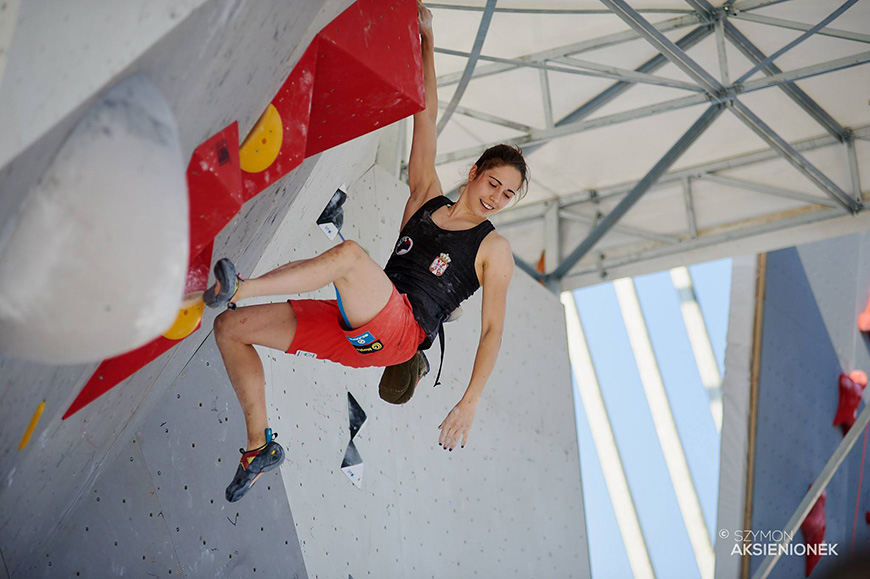 Staša, only nineteen years old, already qualified last year with her strong performance at the IFSC World Championships Paris, claimed her first Gold medal for bouldering, outside of youth events.

Sean McCol from Canada also performed well, surpassing the early crux and falling just a few moves shy of the high point for Bronze; Fanny Gibert got the third place in bouldering.

We asked Staša how she feel after this World Games gold.

Do you remember the first day your start climbing?

I started climbing when I was a child, I have a picture on the wall in Pampers. I climb as long as I know for myself. Quickdraws were my kind of toys, I traveled around the country with my parents and other older teammates to find some good rocks. Later on, when I was about five years old, we moved out of town where I still live. I’ve been climbing here for my whole childhood and developed later my technique.

When did you decide to start competing?

Actually it wasn’t a real decision at first. My teammates, including my older sister Ana, went to Bulgaria to an international youth event in Veliko Tarnovo in 2004. My parents coached the team and brought me too. As I’ve always enjoyed competing, I found it amusing to be there among all those kids, trying to reach the top. It was lead and speed climbing; bouldering competitions were not popular at that time. That year I took the 11th place, but two years later I actually took two silver medals, in both disciplines. That was the exact moment when my parents realized that I had a potential, and we started traveling to Austria regularly, competed on local Winter Cups in Imst. Shortly, I made a huge progress by competing on the popular Under 14 cups such as Color Cup in Imst, Arco Rock Junior and Petzen Trophy. I won many medals, every year I was stronger and felt better. It was logical to continue the career in the youth competitions and further on to senior. It is in my nature to prove my qualities, to compete. I strive to dominate.

How did your passion change?

Firstly, my passion was about accomplishing big things only. I was young and I didn't quite understand what climbing really meant to me. I could never imagine how my life would look without it. As I grew up, I explored the nature of climbing movements, broadened my abilities and falling deeply in love with climbing. This passion increased year by year, mostly for rock climbing. Later on, I became addicted to bouldering competition, to that irresistible adrenaline kick I was feeling. Especially when I started doing World Cups, that drama and positive stress during the competition, when you just assume what is going on around you and still do your best and follow your intuition. Again, there is this strive to become better every day, to be aware of every muscle in the body and be able to control every possible movement. I always want to achieve the absolute control in that exact moment and I feel really glad.

I always change my favorite climbers, when I was a child those were Adam Ondra and Angela Eiter. When I started following the bouldering World Cups, I cheered for Alex Puccio and Anna Stoehr. Nowadays it is very hard to tell, since we compete against each other. I love the training passion and hard work of Patxi Usobiaga, the strength, bouldering skills and mental attitude of Melissa Le Nevé and the coordination of Tomoa Narasaki. I can't really choose one.

How do you feel about the last result in Wroclaw of the World Games?

This is my first senior gold and the first gold medal for Serbia on The World Games. It is special, because it is my first and only appearance on this competition, since climbing became the Olympic sport and bouldering has never been on The World Games as a climbing discipline. I feel like I’m writing a new chapter of climbing in my country, which makes me very proud. I had a huge support from Serbia, organizations and people from my hometown Nis. I am also very thankful to Polish supporters and the audience, because they helped me to fly across the boulders. I will always remember that great atmosphere!
Since I passed all the exams at the Faculty of Electrical and Electronic engineering this June, I finally had tons of time to train and exercise for the summer competitions. I made some changes in my training routine and diet, I brought excessive amounts of positivism and managed to lift my form to a satisfying level, after a huge drop at the last couple of World Cups. I felt refreshed and I know I would perform good. I dreamed about this heavy piece of gold continuously and now I actually had it on my chest. I won't stop. It is time to haunt some more finals and medals!